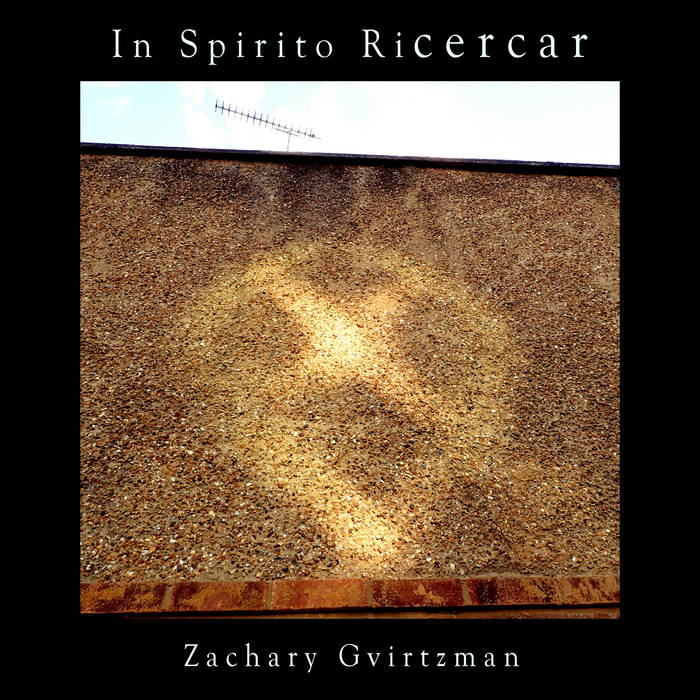 "In Spirito Ricercar" is a short collection of music by JS Bach arranged for clarinet, bass clarinet and tenor saxophone. 'In Spirito' means 'in the spirit' in Latin; it's also the root of the English word 'inspiration', which comes from the Latin for 'breath' (respiration). 'Ricercar' is a variant of the Italian word 'ricercare' or the French 'rechercher' meaning to search or research, which in turn comes from the Latin 'circare' meaning to wander. It's also a form in Renaissance music which involves a thorough, if not exhaustive, treatment of its musical material (Bach also composed pieces with this title though none appear on this recording). As an ensemble, then, the title roughly translates to in the spirit of searching/research' or also 'in search of spirit/breathe/inspiration', both of which felt like appropriate projects to explore during this current period of isolation and reflection.


A note on playing Bach (after Glenn Gould):

Playing Bach is like playing chess: the beauty of the sheer and unwavering logic involved; the way each piece or game (partita) is so different even if framed by the almost identical beginnings and endings; the knowledge that practically anything you play has been played before by a multitude of other players; the particular camaraderie between lovers of either field; and, perhaps most importantly, the effervescent yet overwhelming sense of peace that descends like a blanket from the sky when one is truly immersed in the music of it.

That's why when I set out to record this short compilation of a few of my favourite pieces by Bach I decided not to think at all about conventional approaches to playing this music. That isn't to say that I took liberties with it, at least not for the sake of taking liberties, I hope you'll agree - unless, of course, you think that arranging one of Bach's best loved Preludes, the Eb major from Book I of the Well-Tempered Clavier, for four clarinets (two B flat and two bass) is a questionable move. Or if you wonder whether using the sympathetic resonance of a Turkish oud (cousin of the European lute) to create a kind of semi-natural acoustic space in which to play 2 movements from the solo string suites is an unnecessarily elaborate, not to mention unorthodox, technique. Or question if the labyrinthine Canon per tonos from the Musical Offering, a canon at the 5th which modulates ever higher with each repetition, should really be experienced sonically at all rather than purely intellectually. And then, you might also ask, what is the use of yet another arrangement of the Chorale Prelude "Ich ruf zu dir, Herr Jesu Christ"?

Any and all of these questions are perfectly valid. What's more, as I'm sure you will discern from the outset, the music in this short collection is far from perfect. That's not because I haven't spent a considerable amount of time studying it, playing it, living with it. Nor is it because I performed it solely on instruments which are my second discipline - woodwinds, my first being keyboards. It's also not because I recorded it in my home studio and edited, mixed and mastered it myself during the lockdown months of this spring. It's because to my mind there is an unfaltering quality in the music which is untenable even to its most dedicated and gifted interpreters - of which I certainly do not pretend to be one.

So why play Bach? Well, for the sport of it, the challenge of navigating the music. For the pleasure of hearing the sonorities, the satisfaction of the music's construction. For the stories the pieces tell (yes there are stories in there!) as they unravel their forms, whether they be movements from a Dance Suite or full-fledged fugues. For the rich emotions embedded in the Baroque artifice. And most of all for a fleeting glimpse of that sense of peace which seems to emanate from another world. Just like playing a good game of chess.

This album is dedicated to the memory of my first saxophone teacher, Dave Brooks, who passed away during the making of it. A close friend of my step-father, musical rebel and generous soul, he jammed with Hendrix in the '60s, fronted his own bands on bagpipes and tenor and devoted much of his later musical life to the traditional music of his Scottish heritage. Without his initial guidance this recording may never have come into being. Thanks Brooksy.

Zac Gvi is a composer, sound designer, producer and multi instrumentalist from London.

Bandcamp Daily  your guide to the world of Bandcamp

Serena Cherry debuts her black metal project, plus a Pick from the Crypt block from Svalbard